The battle of two primary colors – red and blue, has been fought since forever. Firefighters and cops are both professionals who serve the public. They are brave and lay their lives on the line every day to become our everyday superheroes. But what differentiates one from the other? Both rescue people and solve problems. But is one better than the other? Let us dig into the differences between a firefighter and a police officer

A police officer is a law enforcement officer and solves a crime. On the other hand, a firefighter is one who is mainly responsible for putting out fires or rescuing people. Apart from this, they face different dangers. A firefighter faces the danger of being burnt while a cop might get shot at. These professions also differ when talking about job descriptions, salary, working conditions, employment outlook, licensing and many other factors.

Education Requirements For Police And Fire

Both the jobs require the applicant to have a high school diploma. They both encourage higher education to improve your chances at promotion and a higher salary. For fighters, a degree or course in fire science is required. But in the case of police officers, they require you to have a degree in criminal justice. Both these fields also prefer their applicants to have a minimum of 2 years of college education but it is not mandatory.

The duties of a police officer mostly involve dealing with criminals and enforcing laws. This may include solving various cases, providing security to people, apprehending suspects, patrolling and many other things. They aren’t directly responsible for extinguishing fires. But, they are supposed to help firemen rescue the people trapped in or extinguish the fire.

Firefighters, on the other hand, are responsible mainly for extinguishing fires and rescue operations. The iconic image of a fireman rescuing a kitten stuck in a tree is part of their responsibilities as well. They aren’t responsible for handling criminal situations or drug cartels. Firemen are also not authorized to carry firearms or arrest people.

Police officers work full time and on different days. The hours of an officer change from one department to the other. Usually, juniors must work overtime as seniors get more time off. The rule is that cops can work a maximum of 40 hours at a stretch before taking some time off. Cops are however on call every breathing moment. Crimes occur at any time and they are expected to respond unless they are in an unavoidable circumstance. Thus, they usually carry their badges and have an off-duty firearm of their own.

Firefighters usually work 24-hour shifts staying at the firehouse. After this, they are supposed to get 48 hours off to rest up before the cycle continues. Some firefighters follow the shift system where they work in 12 hours shifts for a few days and then take a day off. In either case, a firefighter usually works 240 hours in a month and usually doesn’t take their work home. They can, however, expect to have a scheduled duty on any day of the week.

Both firefighters and police officers get an average salary of around $40,000-$50,000 with police officers getting paid slightly more. However, the hikes in the salary are considerably higher for firefighters. For example, if one chooses to work in New York, their salary would increase by about 70% above the national average. The increase in income with experience also is quite high (about 50% in 20 years). In contrast, the rise in a police offices salary isn’t so high. Their salary can increase about 30% over 20 years of experience whereas the highest paying state – Los Angeles pays about 50% more than the national average. Thus, the future scope of a firefighter financially is more than that of a police officer. 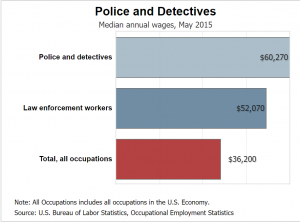 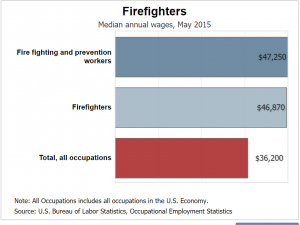 Currently, there are about 800,000 police officers compared to 300,000 firefighters. However, Bureau of Labor Statistics is predicting that police officer’s jobs will grow 4% more by 2024 while in the case of firefighters, it will grow 5% in the same duration.

As you can see, no matter which color you choose, you will be hailed as a hero at the end of the day. Both have their share of risks. One is fire and the other is bullets. If you are passionate enough for either one, choose it and help people one day at a time. 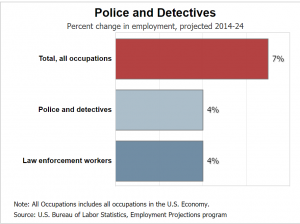 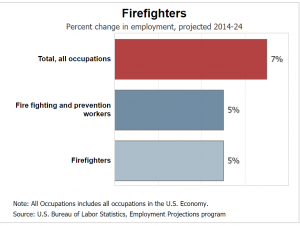 Pursuing A Career In The Fire Service?

I Am! Not At The Moment

Great! Let's get you matched up with college programs in your area.

There are colleges offering programs in your area right now.